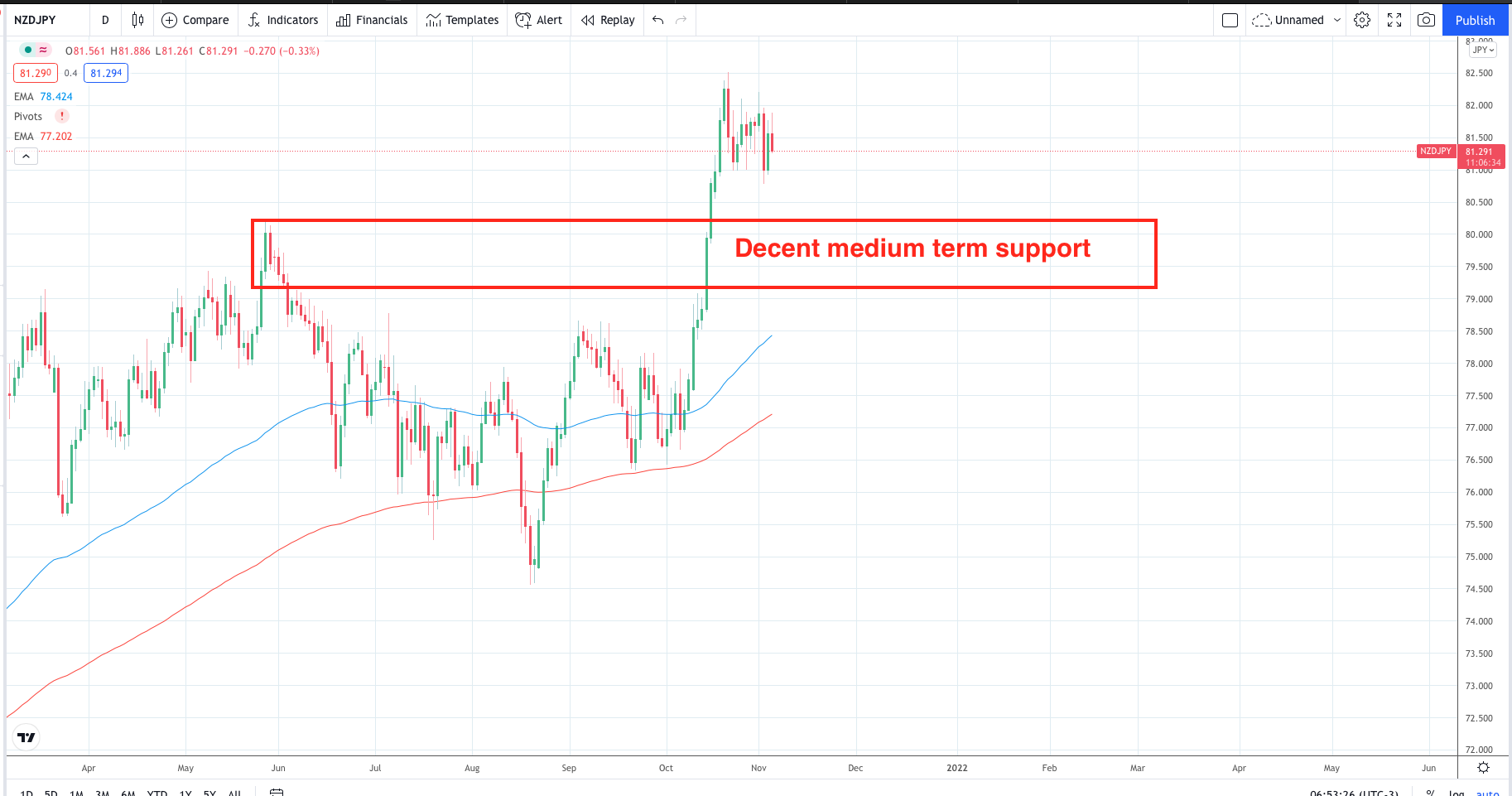 The bullish case for the NZD

Inflation is rising (like almost everywhere). New Zealand Q3 inflation has risen at its fastest pace in 10 years with the annual inflation rate moving up to 4.9% from 3.3% in the second quarter.

The unemployment rate is down to near record lows at 3.4%. Employment up 2% and the participation rate higher too. The only caveat to this is that Governor Orr said that the jobs data was extremely volatile at present.

ANZ is forecasting the RBNZ to raise interest rates to a 2.0% neutral rate by the end of 2022. Westpac revises their RBNZ forecast higher seeing its peak at 3.0% in 2023 vs their previous forecast of it peaking at 2.0%. The chances of a 50bps rate hike on November 24 must be increasing now.

The divergence between the RBNZ and the BoJ

The huge fall in the JPY has been due to all the world’s central banks being expected to raise interest rates to counter surging inflation. The one central bank that is not expected to respond is the BoJ. This means that the divergence remains in place between the BoJ and the RBNZ. This favours medium-term NZDJPY buying.

Don’t forget the strong seasonal pattern in place for the NZDJPY below. 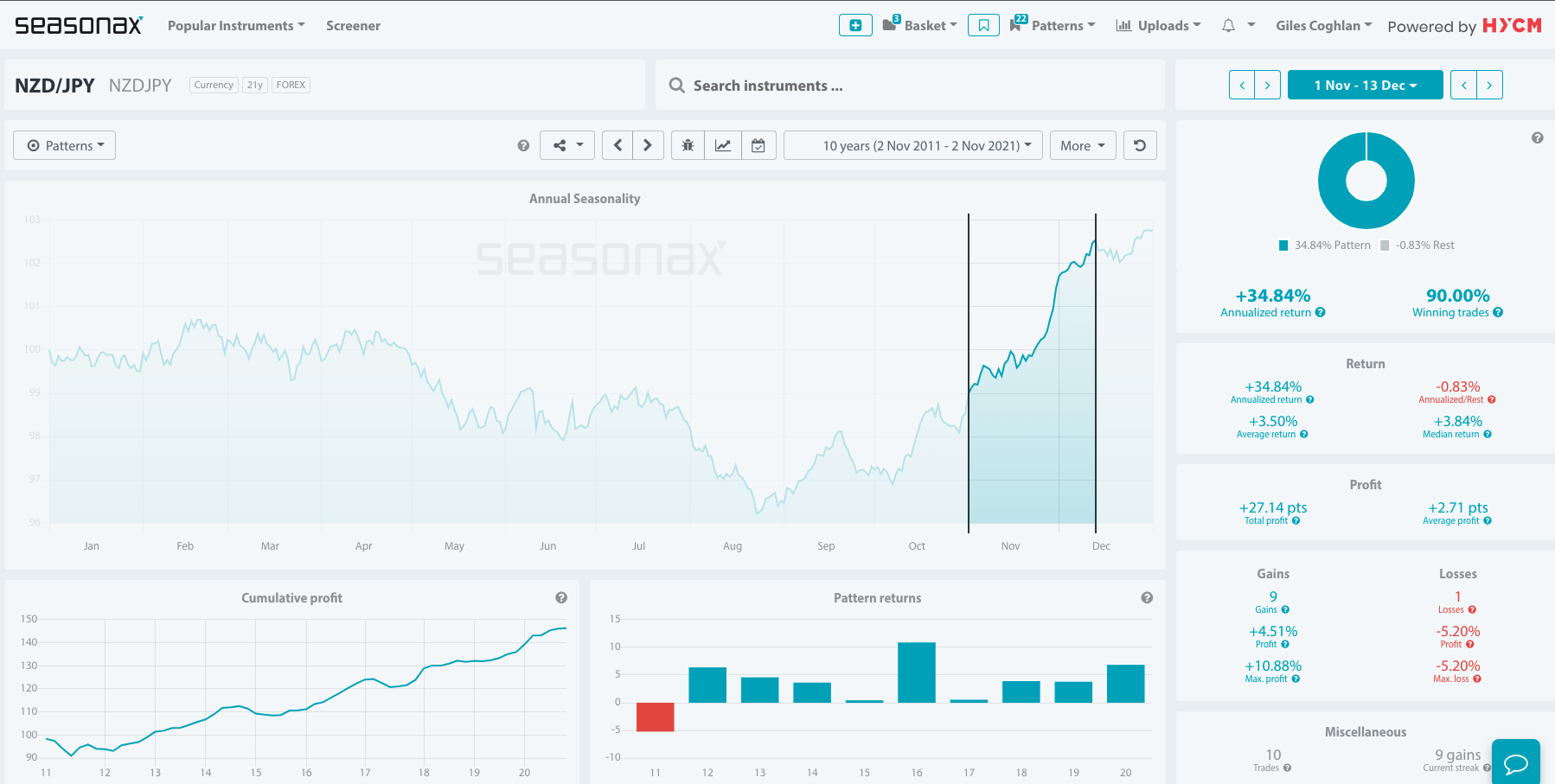 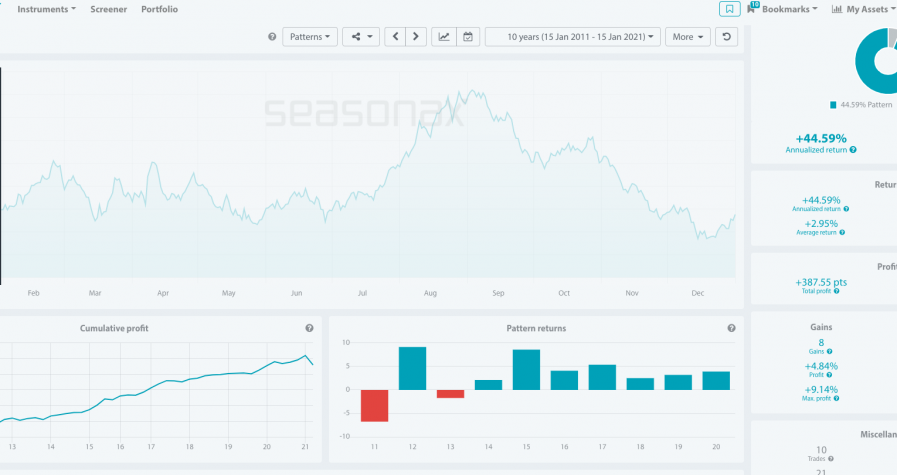 Is gold weakness set to stay?

EURUSD: Where next for the EURUSD? Will rising COVID cases in Europe keep prices pressured?
FTSE100: Can the FTSE 100 move back up to 7500 before year end or is that too hopeful?
Gold: Gold seasonals are very strong around December end and January. Will buyers step in?
Oil: Is oil now supported by OPEC being on standby to support oil prices if needed?
Copper: A growing Chinese economy typically supports copper. Will China’s growth continue?
BTC: With Bitcoin falling over 20% on Saturday it is a reminder that BTC is a ‘speculative asset’.

EURGBP setting up for further falls?

The age of the meme trader

The power of patience