With things moving at a blistering pace in the world of technology, many investors are rightly wondering what ADA is, and why it has made such big moves in 2021. ADA, a digital asset that was largely unknown last year, is the native token of the Cardano blockchain. Cardano was developed to address many of the scalability and governance issues of first and second-generation blockchains like Bitcoin and Ethereum. In some areas of its roadmap, Cardano is actually ahead of Ethereum (it is secured by proof-of-stake consensus rather than proof-of-work), while in others, it’s still playing catch up (smart contact functionality has yet to launch).

Despite Cardano’s slow and steady approach to development and network upgrades, it is one of the best performing digital assets of 2021. Year-to-date, ADA is currently up almost 550%, this in spite of a market-wide correction that has seen most digital assets giving back the majority of 2021’s gains. The market leader, BTC, is currently only trading up around 16% since January this year. To add further context, second place ETH is currently up around 140% year-to-date.

Even if you go back to March of last year when the entire market suffered a deep crash, ADA is currently up 7100%, to ETH’s 2300%, and BTC’s 880%. In some ways, ADA is behaving as ETH did during the last cycle, where it far outperformed the entire market.

However, an interesting aspect of its recent price action is that ADA is not experiencing the larger drops that you’d expect to see with a digital asset that’s further out on the risk curve. In other words, it has outperformed on the way up but has also protected those gains better than the rest of the market during subsequent drawdowns. From the recent peak to the current price, ADA has given up around 45% of its gains, ETH is trading 47% off its highs and BTC is down around 41%, while in the rest of the market, it’s common to see drawdowns of 60% – 70%.

This kind of price action suggests an asset that’s being bought up on every dip, but not unloaded on the market after a rally, at least not entirely. Also, when you consider that there are no miners in Cardano’s ecosystem, you can see why ADA stakeholders may be allowing their rewards to accumulate rather than having to sell in order to finance energy-hungry mining operations.

While ADA’s performance over the past year or so has been truly impressive, it has recently set a daily lower-low and also closed below the 200-day moving average for the first time since November 2020. This, along with declining volumes and narrowing moving averages, could be signalling an asset that has topped and is about to roll over. Dip-buyers should be aware that failure to hold $1 is likely to lead to further downside.

However, with the entire market having already corrected so substantially, a broader market bounce at these levels could certainly propel ADA to new highs. ADA has recently dipped below, and then broken above the 200-day moving average; if it can also break above and hold the 20-week, currently at $1.41, then a change of trend could be underway. On the fundamentals front, Cardano is currently testing the network’s next upgrade, which will bring smart contract functionality online. The upgrade is scheduled for September, so, be on the lookout for volatility surrounding this event. 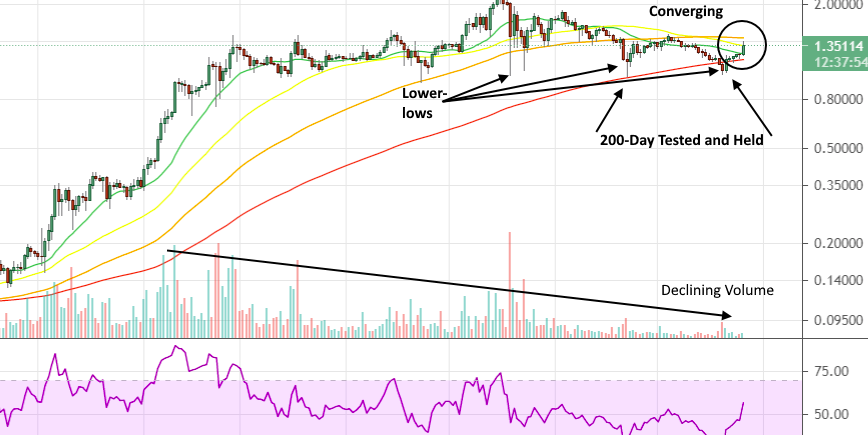 As bullish as this asset’s chart has looked throughout most of 2021, it is in the middle of a broader market correction that has affected all digital assets. What this means is that BTC is still in the driver’s seat and has a lot left to prove if investors are to trust that the correction is over. The recent bounce is encouraging, but the bulls need to keep BTC above $42k if the rest of the market is to gain confidence.

If you’re looking for a reliable and regulated forex broker, HYCM is a great choice. It has offices worldwide and offers ADA and other cryptocurrency CFDs on their MetaTrader 5 platform with excellent trading conditions: 1:20 leverage and significantly low spreads. HYCM is an established, regulated, and award-winning forex broker dedicated to supporting traders every step of the way with online webinars and workshops, and 24/5 online support.